“Slow and Steady” does not always win the race. The business world is very fast paced, competitive, and often a ruthless world where the one who stays ahead of the game is more likely to emerge victorious. “Competitive Advantage” is what businesses have that puts them ahead of the competition.

What is competitive advantage?

“Price Cutting” means a company just keeps lowering the price of whatever it is that it’s selling. Companies in very competitive markets rely the most on price cuts to lure customers from one company to another. From the perspective of the entire organization, companies have a competitive advantage when they can get their operations and production lines more efficient, and so it costs them less to produce whatever they’re selling. If it costs one company A $3 to produce a product, but it costs company B $5 to make the same product, company A will have a big competitive advantage in a price war. 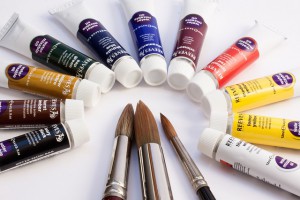 If companies are unable, or do not want to reduce its prices, it can still get the edge by adding unique features to the product, forming effective marketing strategies or developing any other strategy that differentiates the product and makes it more valuable for customers. This is called “product differentiation”, meaning what they  make and sell is different from what any other company makes or sells. This could be derived from adding new features to their products, launching marketing campaigns that make more people aware of their products than the competition, or having a great reputation with customers that encourages them to keep coming back.

Sustainable competitive advantage come from a company’s core competencies. These are the main strengths of a company that help it sustain itself in the long run. For companies like Google and Apple, the core competencies are technology, research and development, brand reputation, and differentiated products. 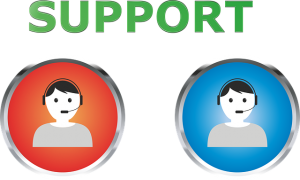 Google is known for its fast and efficient search engine, and Apple keeps renovating its products so that customers keep coming back. Microsoft became the world’s largest software company through its ability to be flexible and adapt to changing technologies and customer wants. Facebook was able to create its own niche in social media and gain a massive user base. Walmart got the edge over others in the retail industry by providing low priced goods and services whereas IKEA went a step ahead by not just providing cheap furniture but excellent customer service.

Companies need to be able to focus on their core competencies. Walmart would have a hard time launching a new high-end limited line of fashion, for example, because they’re not known as a luxury brand. Their brand reputation specializes in cost cutting and wide distribution, which are not seen as valuable to the fashion industry.

These are just a few of the tools analysts use to look at the competitive advantage held by certain companies. 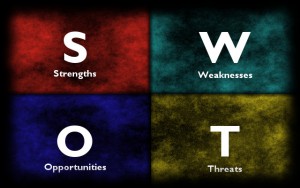 One of the most popular ways of looking at competitive advantage is conducting a SWOT analysis. SWOT is an acronym for strengths, weaknesses, opportunities, and threats. This is an analysis of a company’s internal and external environment. This tool enables managers to develop strategies to remain competitive. A company’s internal strengths and weaknesses is relative to its external opportunities and threats. While its core competence can be considered a strength, to stay competitive, the firm needs to exploit any opportunities available, work on minimizing its weaknesses and protect itself from potential threats. The business that can sustainably do so will survive in the long run. 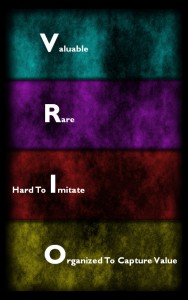 Competitive advantage comes from superior performance which comes from a company having the right combination of resources. Resources can be both tangible and intangible. Tangible resources are physical things like land and machinery, whereas intangible resources are more abstract like intellectual property and goodwill. Companies can determine if it has the right combination of resources to be at a competitive advantage by using the VRIO framework.

This framework determines if the firm’s resources, capabilities, or competencies are valuable (V), rare (R) and costly to imitate (I), and if the firm is organized to capture value (O). If the company says yes to all four, then it has a competitive advantage. If it satisfies just one or no conditions, then it is at a competitive disadvantage, which means that it is worse off than its rivals. If it satisfies the first two conditions, then it is at competitive parity, which indicates that it is at par with its rivals. Checking three of the four factors, puts the business in a temporary competitive advantage, so they need to work on checking the 4th item before one of their competitors catch up.

Companies cannot put an actual number on their competitive advantage (or disadvantage), because a lot of it comes from intangible factors like goodwill and brand loyalty. However, investors and upper managers do need to have some sort of performance metrics by which they can judge how well they’re performing compared to the competition, which is where financial ratios come into play. 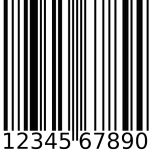 Financial ratios are often categorized in four main categories. Activity ratios which provide investors with an idea of the overall performance of the organization. This includes inventory turnover, which is calculated by calculating cost of goods sold by average inventory. A high inventory turnover is a positive indicator as it shows that inventory is selling fast. Similarly, there is a receivables turnover and payables turnover that indicate how fast the company can collect from its debtors and how fast it pays back to its creditors, respectively. A high asset turnover ratio indicates that a firm efficiently uses its assets to generate revenue, which is a good indicator that a firm is currently enjoying a competitive advantage in its field. 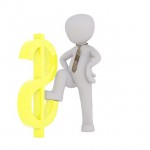 Creditors and investors widely use liquidity ratios when deciding whether to extend a loan or make an investment. They include current ratio, quick ratio and cash ratio; all of which focus on a firm’s short term assets and liabilities. Creditors need to know if a firm is liquid enough to be able to pay back their short-term debts.

Companies with bad liquidity ratios have a harder time getting credit and investments, which in turn puts them at a competitive disadvantage in their industry because they are less flexible with investing for growth.

Solvency ratios focus more a company’s long-term obligations. Lenders give loans to businesses only if they’re sure that the business has the ability to make regular interest payments and that they’re not going to default.  That is why ratios like debt-to-asset, debt-to-equity and interest coverage are used to measure solvency.

Much like liquidity ratios, having strong solvency ratios makes a business more flexible on how it can borrow money and adapt to changing markets, so it is an indicator of a strong competitive advantage. 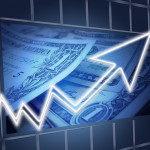 Profitability ratios are the most popular when it comes to financial ratios and they are also very easy to understand. They measure how profitable a business is by calculating gross-profit margin or net profit margin, return on assets or return on equity. Higher returns provide a positive indicator for firms.

Financial ratios are useful as they provide figures that can be compared across firms and industries. Firms can get a sense of their own position and their rivals’ position in the industry by analyzing financial statements and obtaining these ratios. This, along with other factors, leads to important strategic decision making that can make a firm more valuable than its competitors and give it the edge in business.